I was really looking forward to this ride, the 600k, Windsor-Chester-Windsor.

I had unfinished business with this ride. 4 years earlier this was my first attempt at a 600k, and a massive eye opener with regards to fuelling and sleep deprivation. However, all that aside, I had loved the ride, and the support and organisation made it one of the best Audax events in the calendar, especially if you were a novice like me. I finished the ride, but out of time. I had suffered major stomach issues between 300-400km and went through 2 controls totally unable to eat anything. By the time I started feeling a bit better and could eat again I was so far behind, and the over distance event was just a little too far for me to complete in time.

This time, knowing I was wiser and so much stronger, I was prepared for all it had to offer – or so I thought.

The 1st day, was hot, exceptionally hot. Given that it still felt like winter a week earlier I think everyone was caught a bit by surprise. The heat made it easy to drink, but not so easy to want to eat.

There was a good contingent from my local Audax club, and although we were all doing our own thing, we would catch up with each other at various controls. I made good time all the way up to the Chester turn point, and was bang on target with my higher end speed estimates. My confidence was still high, and I was in good spirits. After food and sleep, I set off in the early hours back towards the start.

It was still warm & not very windy though the night, but for some reason my pace had slowed. I arrived at the breakfast control, hoping for some porridge, but sadly on offer was cereal, or apple crumble and custard – not really what I fancied for breakfast. So I drank my tea, ate my cereal and went out to continue. As I loaded up my Garmin however, I somehow managed to delete off the next section of the route. It was totally a user rather than gadget error which left me with 2 choices. I could use the route sheet, which I was happy to do, or (the easier option) ride with another couple of riders who were leaving at the same time. Since I had been riding at a similar pace to them earlier in the ride, I opted for this. We had all agreed that at the next open petrol station or shop that we would stop for a bit more to eat. However, at 6am on a Sunday morning, there was nothing to be found, so we kept moving. Frustratingly, I had food in my saddle bag, but since we weren’t pausing for breath, I couldn’t get at it. I knew I was running out of energy and needed to eat soon.

Eventually, after a couple of hours, we came across an open Tesco express, and stopped to get food and drink. By this point, I had been getting slower, and started referring to the routesheet more, as it seemed I might need to let my new riding buddies go ahead without me. Shortly after the food stop, we did just that. There was a steep climb out of the small town, and my energy just went. I needed to ride a bit slower until the food kicked in, so I let them go ahead. 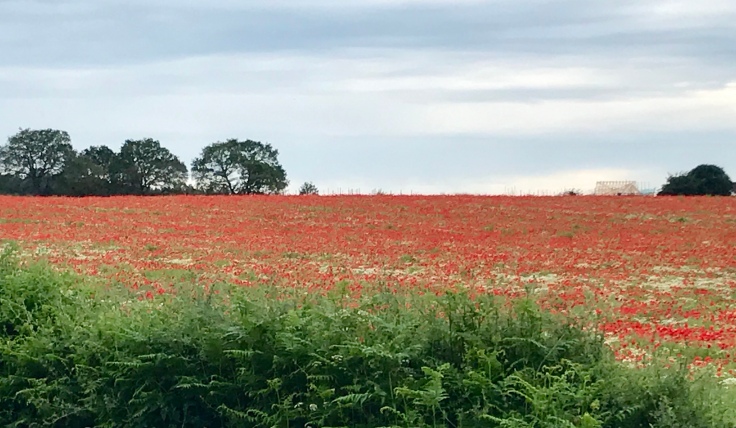 I got slower and slower, but was so relieved to get to the next control, and get some real food inside me. I was sure going to need it in the next stage. I stayed maybe a little longer than I should have, but I wanted to eat as much as I could, as I was about to get to the hilly part of the ride.

I was still within my time targets, but much closer to the lower end now. My average pace wasn’t great, and the temperature was warming up again, despite the start of some drizzle in the air.

The next section was a bit of a blur to be honest. The route through the Cotswolds southbound was more brutal than it had been northbound, as all the hills were steeper. Heavy rain showers had started to set in, so it was a case of waterproof on – waterproof off – waterproof on and so on. It was too warm to leave the waterproof on between showers, and too wet to ride without. It didn’t help my average pace at all, although woke me up nicely.

I arrived at the 2nd to last control with 6 hours left to do 100km. It should have been straightforward. The worst of the climbing was supposed to be over, and my normal 100k pace was now normally around 5 hours or less.

I had already decided that I would whizz through controls now, just grabbing quick food and drink, dealing with the necessities and straight back out. All the control volunteers would grab all my stuff for me and deal with it, whilst I refuelled my body and made for a quick exit. It was certainly a 5 star service.

Setting out I made a great pace, I was confident that I would still finish in time, with a little in hand. Breezing through the last control, having really picked up the pace, I settled in for the last slog to the end, still with enough time in hand to get the job done. The rain had stopped, and also I had massively eaten into my time buffer, all was good. But I knew I needed to move quickly to finish.

I remembered the last time I did the ride, the route towards Henley to the end had followed the main road out of town and then cut across country to the finish along fairly benign minor roads. Having not studied the route too carefully before riding this time, I had assumed the same would be true this time. However, I was mistaken.

The undulating route caused me no issues to start, but then picked up part of the Chilterns Ridgeway route. Although beautiful at the end of the day, it meant that I was in forestry sections, in failing light, on substandard roads full of potholes. With a few miles of short sharp climbs, winding descents, it was impossible to maintain any kind of decent speed safely. Had I got there earlier it might not have been a problem, but I didn’t feel particularly safe with all the shadows on the road.

My speed had now slowed considerably, my energy levels dipped, and for the first time I started getting the dozies. Whether I liked it or not, with around 30km left to do, I needed to shut my eyes for a few minutes, to get me to the end. Any spare time I had was now eroded away.

Finding a quiet bench in Henley, I ate a ‘pocket rocket’ coffee choc, and rested briefly with my eyes closed for 5 minutes

Once done, I jumped onto my bike ready for the final charge back to the start. It was unlikely now that I would make the finish by the cut off, but now the hills were done I was going to give it my best shot. About 10k from the end, some riders from the later start group caught up with me, and we rode in together. They were half an hour ahead of the cut off, I was half an hour behind.

I was very disappointed with myself and tried to work out where it had all gone wrong. I know that the section after breakfast had caused me issues, but I had been riding slower before that. It was confusing, since I knew that my legs were quite happy to continue, but I just didn’t have any power to put in. Basically the engine was in good shape, but had run out of fuel.

I had another 600k lined up in 3 weeks, so it wasn’t the end of the world, but I needed to understand how day 1 had gone so well, but day 2 so wrong, so that I could fix it ahead of that event. I arranged another catch up with coach Trevor (remember him?) to work it all out.

He asked about what I ate on these rides, and I explained that I went in fully carb loaded, which is why I was most likely so strong at the beginning, but that I found it hard to eat much when I was going. I have an issue in that in order to eat a large quantity of food, I need to sit down and digest it. So to eat a full calorific meal, I would need to sit down for 3/4 hr +, but when I’m trying to reduce the time spent at controls, I end up eating less, as that’s all I can force down quickly. Then on the bike, I’m eating various bars, nuts etc. But all in all it possibly only adds up to 2000 cals or slightly more at most. This means that realistically, I am going into day 2 with very little in the tank – hence losing strength and slowing down.

He calculated my calorie needs for 300k+ a day rides to be around 5400 calories!!!!! I don’t think I’ve ever eaten that many calories, not even on my most indulgent, piggiest day. How on earth was I going to do this without suffering from the dreaded stomach issues that also come from long distance riding.

He challenged me therefore to up my calorie count on the next weekend to 4000 cals each day as a practice run. So I went for a ride, ate lunch out, with pudding, same again for dinner on top of a high calorie breakfast. On Sunday it was pretty much a repeat. I’m not sure I quite got to 4000 cals, but I was pretty close. It was quite a mission.

I hatched a plan for the next ride with the Hubster, and purchased a variety of ‘expedition foods’ which were calorie counted and just needed mixing with hot water. At 800 cals a piece, easily digestible food, and no waiting around these could be the answer to my problems. 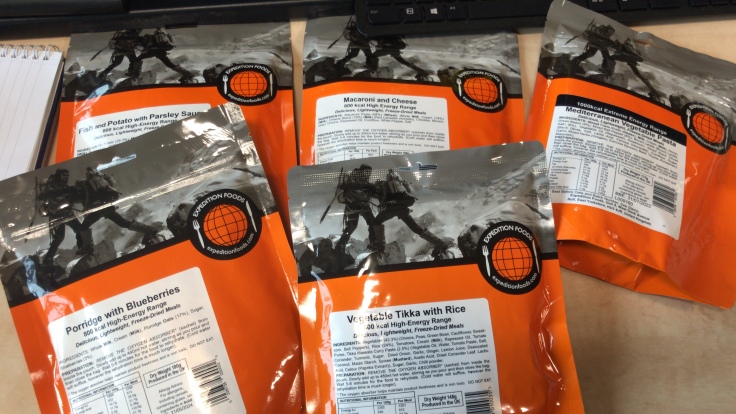 3 weeks later, we loaded up Dora, complete with dogs and my supply of food rations, and headed over to Essex for the start of the Fenland Friends 600k. I wasn’t alone in it being a last chance qualifier. The severely depleted entry field was probably 80% of people in a similar boat to me. This was to be a pretty flat ride, with only a few straightforward hills. The weather was fine (note hot) and we were ready to roll.

I am not going to write much about this ride, as the attached video really sums it up quite nicely. However, I will confirm that I completed this ride, as strong on the last section as I had been at the start, and finished with around 1.5 hours to spare. I was on track with my timings pretty much all the way and the food strategy had worked. 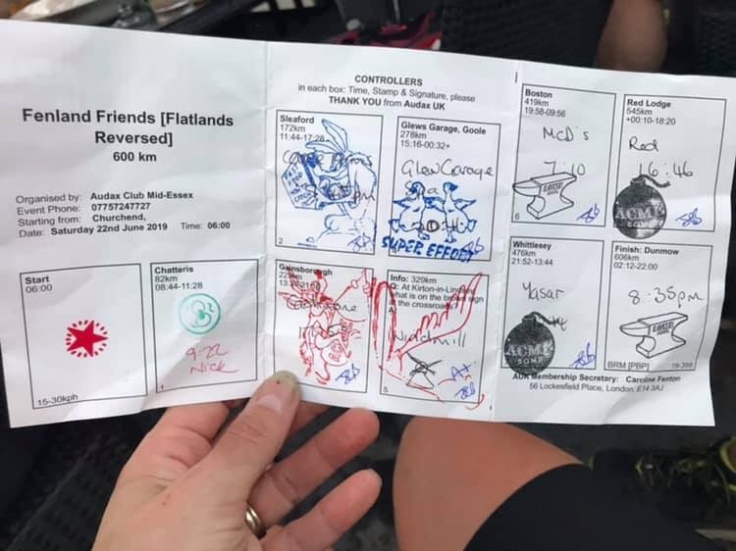 Enjoy the video – you will see at the end that I was extremely relieved to have got it done.